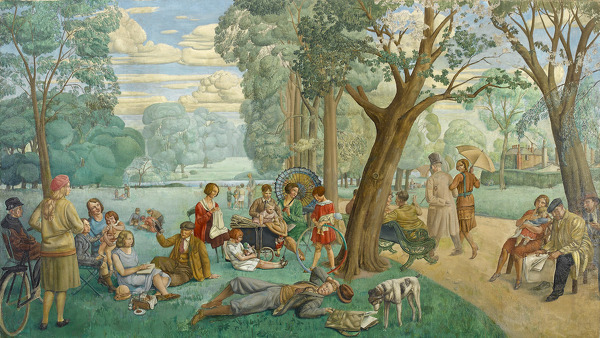 Stanley entered the 1932 Rome Scholarship in Mural Painting under the insistence of Rothenstein who was convinced that Lewis, having been runner up two years earlier, was capable of winning a scholarship. Still under the age of 25, by a matter of weeks, he was still just eligible to enter, but this would be his last chance. Accordingly Stanley asked the Director of Education at Newport, where he had recently accepted the post of teaching assistant, for three months off.

I thought I would never get the chance to enter the Prix de Rome again but Rothenstein kept writing letters to me and encouraged me to enter adding, "you;ll win next time".

Stanley prepared initial studies and cartoon at home, Llwyn-On, and then moved to London to complete canvas during first few months of 1931. He knew Hyde Park well from his days at the Royal College of Art - he loved going there  to sketch . The subject - a metropolitan scenescence - makes an interesting pendant to his Allegory of two years earlier. These two pictures might be seen as a discourse between Town and Country.   His choice of an overtly  modern subject might also have been to answer his critics who found that in Allegory "his field workers are much more conscious of Rome than of their legitimate business….”. The characters in Hyde Park show no such detachment.  The painting gives a remarkable account of a summers day in central London.   Stanley resisted criticism from his fellow student and fiance, Muriel Pemberton, who interfered with the painting insisting he should be more modern in his approach.  Similar pressure was applied by Stanley 's landlady and Aunt, Sally Taylor, herself a painter whose art took you beyond the normal world - abstract and expressionism and so on.  Stan you might as well be a camera she said sniffly when she saw my studies of the painting.  And that is it really, I felt an inner force burning to capture my world around exactly as I saw it in the reality that it was.

That Hyde Park was only awarded third place, a disappointment to Stanley,   is perhaps not surprising - the life-size scale of large scale cartoon (cat ) works wonderfully well but the finished oil makes a better easel painting rather than a mural. The painting is in fact closer in spirit to a Breughal – rather than for instance Puvis de Chavannes mural, and  has the quality of a  busy easel painting rather than the static classicism that was so much the spirit of the Rome School.

The composition was partly inspired by Seurat.  Stanley admired Seurats strong silhouettes “dark figures against the sky”, such as he had seen in Bathers at Asniers in the National Gallery. Stanley was also aware of paintings by other artists such as Philip Conard (a reproduction of whose 1923 R.A Exhibit Kensington Gardens 1923  he kept in one of his scrap books)  . It is also highly likely than Stanley had in mind Percy Horton's composition Kensington Gardens (1923), Horton having been a teacher at The Royal College of Art from 1922-1924.

Stanley himself appears center stage, reclining, his sketching bag to hand. My  mother and sister made fun of his plus fours, which I bought for riding his Raleigh bike across London.  The models for the painting were mostly people Stanley saw in the park – “real people are often like that – groups of people enjoying themselves”. He visited the Park early each morning to sketch the down and outs who slept there at night. From numerous pocket book sketches Stanley worked his figure studies up at his lodgings in Earls Court (see cat. no.     ). The man seated on the far right, reading, was Stanley’s father. Stanley sourced other figures from his pocket book, “Look at Albrecht Durer – he never left the house without a sketch book –recording a broken wall, a tree, a figure walking.” Some of the models Lewis used were from Newport. Many of the children were from Croesycieiliog. Mrs Roberts doing needlework (seated in red), Clifford Barry, one of Stanley’s students at Newport who Stanley considered to be a fine watercolourist, (seated extreme right smoking and mid left drinking from a flask). The old lady seated in profile on the left was a Royal College of Art Model. The fashionable lady holding an umbrella arm in arm with a gentleman in a top hat was Miss Muriel Pemberton, later head of fashion at St. Martins (a post she held until she retired). At the time Lewis was courting her; she glances back coquettishly towards him. Pemberton also served as the model for the seated central figure with the Chinese parasol which Stanley recalls going to buy as a compositional devise, to add colour, from Woolworths.  The figure in a red beret holding Stanley’s bicycle is his sister Margaret. His young cousin Joan, (daughter of Aunt Sally) is playing with a hoop - she was also the model for the girl eating an apple in Allegory, Stanley's first attempt at the Rome Scholarship. The woman in light blue sitting on the ground and reading a book is a fellow student from the Royal College of Art. The woman seated to the center left, in blue, is Stanley's cousin Edith .

As well as making 100s of small sketches of Hyde Park Stanley also used his favourite box Kodak camera to record the Park, sometimes squaring- up the photographs.

Hyde Park in Summer was also referred to by Stanley as simply The Park – Study for a large Mural Decoration.