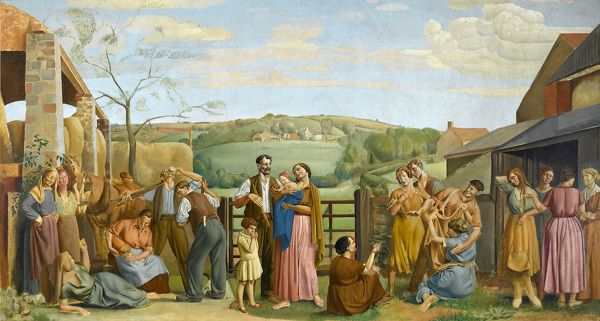 Provenance: the artist's own collection.

The Rome scholarship was the highest possible award and the most coveted prize among art students.   Stanley missed winning the 1930 Rome Scholarship in Mural Painting by a  single vote.

The theme of my painting Allegory is a celebration of simple country life and animals big and small.   I was bought up on a big farm called Whitehall Farm six miles from the city of Newport in Monmouthshire.    As a toddler I was fascinated with all the animals and the goings on, that made up life on a farm in those far off years. The huge horses, shires, the bullocks and cows and the sheep, chickens, ducks, turkeys, pigs, dogs etc and especially the farm workers. My father loved horses and banned horse whips from the farm.

Stanley started the studies for this picture at home, where he found many of the models - the cowherd with the stick, the reclining figure, (Stanley’s mother), the young woman third from right (Margaret, his sister, born in 1902), and the central figure holding the baby (his cousin Edith).

Stanley took the cartoon to London to complete the oil in the large studios of the RCA. He stayed with his Aunt, Sally Taylor, herself an accomplished painter, in Westgate Terrace, Kensington. Here he found the model for the central figure –a road sweeper who happened to be passing. “I looked out of window saw tall man cleaning street so I got him to pose for a few minutes just so I could get the hang of it.” Other London models followed: Girl with apple cousin Joan, daughter of Aunt Sally. Far right Mrs Cursley – great character; friend of Stanley’s Aunt Sally; lady in waiting to Queen Mary. Seated figure back to viewer: Madame Paul of RA – posed all morning and all afternoon but never naked.

In the background, Granary Farm which was adjacent to Whitehall Farm, can be seen.  This "....beautifully built farm and the foreground with the pigsty, barns, yard, cowsheds, and the house in the middle..." was the subject of a later painting by Stanley (see cat. no.   ).

A review of the finalists (undated newspaper clipping) was critical of the fact that "…..there is now some danger of competitors cultivating a Rome Scholarship style, to please the assessors. That the British School at Rome should stand for the classical tradition in art is natural and proper, but classical principles ought not to be confused with classical reminiscences. Take away the reflections of Piero della Francesca and Michelangelo from some of the designs, and there is not very much left.” The review goes on to praise the work of the winner, Marjorie Brooks as being “refreshingly free from the Rome Scholarship manner….”. Of Lewis’s entry the commentator is more critical: “Her nearest competitor is Mr. Stanley C. Lewis, of the Royal College of Art, but his field workers are much more conscious of Rome than of their legitimate business…..”.

This criticism is ironic given that Stanley Lewis was steeped in the traditions of farming, a love of the land and a deep rooted knowledge of the realities of farm labour. Perhaps his wanted simply to elevate the subject – the daily routine he loved so much. Perhaps he also was too conscious of Monnington, his teacher and mentor, who had won the Rome Scholarship of 1922 with his painting Winter, a composition that must, in part, have been the inspiration for Stanleys Allegory:” Yes, I think I thought a lot about Monnington at that period.” Puvis de Chavannes was also at the back of Stanley’s mind: Puvis had an enormous sense of space In a more general sense their was also the influence of Piero della Francesca and the Quattrocento.   But asked who influenced this work replied: no one. Just wonderful composition. Geometry. Triangles. Underneath that picture its all geometry. The first thing a picture must have is a basis of geometry. Underneath any picture of nature is geometry in my estimation.