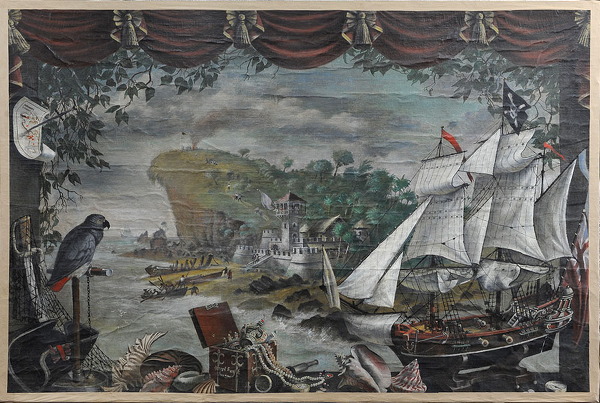 Provenance: removed from the canteen of John D Francis Ltd, circa 1990

Literature:Alan Powers, Murals and Public Paintings: ‘Community Service’, in Sacha Llewellyn and Richard Sorrell (ed), The Life and Works of an English Neo-Romantic Artist, Bristol: Sansom & Co. 2013 p.121
After Sorrell' made an  auspicious start as a muralist - winning scholarships to both the Royal College of Art (1924-27) and The British School at Rome (1927-29).  He painted over twenty major mural cycles during his career less than half of which have survived.   The recently rediscovery Fazakerley murals, comprising four paintings each are reproduced here for the first time in color. 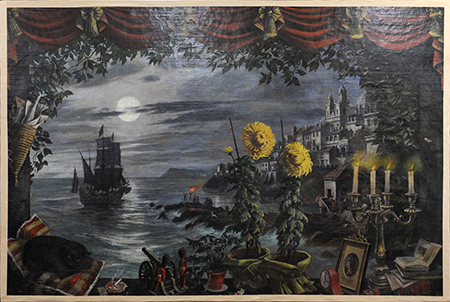 In 1947, Sorrell was commissioned to paint four 6ft by 9ft panels for the canteen of John D. Francis Ltd in Fazakerley, Liverpool, a project completed in 1949, and also designed colour schemes for the factory.  Distant landscapes with buildings, mountains, rocky coastlines, a cathedral and a fairy-tale castle set the character for each of the panels. The foregrounds are crowded with associational objects, while the top of each panel is framed with a festooned red curtain like the opening of a theatre proscenium, with a ledge at the base on which trompe l’oeil objects are displayed. There is a touch of Rex Whistler about these works, although the painting style is heavier and more like Shell advertisements from the 1950s that gathered slightly selfconscious groupings of foreground objects to illustrate a theme. In their original setting, these paintings would have recalled the wartime murals by various artists for those state-sponsored lunch rooms offering a square meal for three shillings called British Restaurants. While many works of this kind have been lost, Sorrell’s canvases were salvaged by a member of staff when the factory closed, although they have never since been exhibited.
(Extract taken from Alan Powers, Murals and Public Paintings: ‘Community Service’, in Sacha Llewellyn and Richard Sorrell (ed), The Life and Works of an English Neo-Romantic Artist, Bristol: Sansom & Co. 2013 p.121)
Richard Sorrell, has pointed out that the Fazakerley mural was probably inspired by Pinturiccio's The Return of Ulysses in the National Gallery with which Sorrell's scheme has much in common with in terms of iconography.
It appears that Sorrells mural cycle had a strong influence on the paintings of his second wife, Elizabeth Tanner, in whose compositions Staffordshire figures and dolls and shells frequently appear on windowsills. Sorrell and Tanner married in 1947.
We are grateful to Mike Goldmark, Alan Powers and Richard Sorrell for assistance.