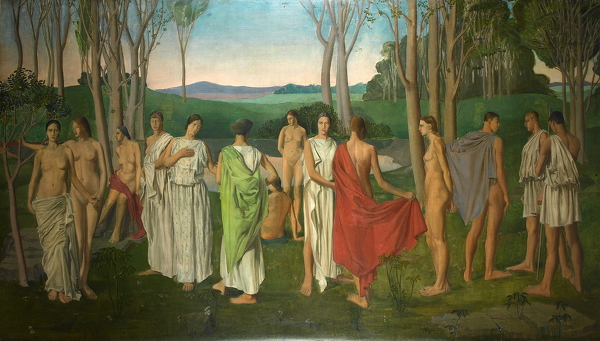 See all works by Ian Grant oil men women 1.PORTRAIT OF AN ARTIST

Painted in his Diploma year at the RCA, and arguably the artist’s most significant early work, Figures by a Lake is a fusion of everything that influenced Grant during his formative years: the work of Maurice William Greiffenhagen, who taught him at the Glasgow School of Art from 1922 to 1926, the influence of William Rothenstein and Thomas Monnington, under whom he studied at the Royal College of Art from 1927 to 1930, and most notably the influence of Pierre Puvis de Chavannes, whose work Grant became acquainted with while studying in Paris during the summers of 1925 and 1926.This painting was Grant’s entry for the 1929 Scholarship to the British School at Rome, for which he received second prize. Of his education at the Royal College, Grant recalled:‘The great high priest of drawing was Ingres and you were told to study Piero della Francesca as a Painter’ (quoted by Peter Davis, A Northern School, Bristol 1989, p. 170).