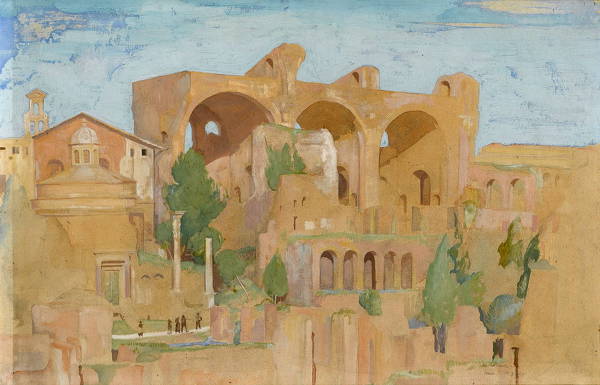 Lawrence was the Rome Scholar in Painting for 1923, following on from Monnington (1922) and Knights (1920), both of who were at the School during his three year stay.  This gouache, completed shortly after Lawrence's arrival, was  part of a series of studies of studies made on the spot.  At the beginning of their Scholarships artists were encouraged to study the principal Roman archeological sites in order to draw inspiration from them.  The Basilica of Maxentius and Constantine (sometimes known as the Basilica Nova - meaning "new basilica" - or Basilica of Maxentius) was the largest building in the Forum and is considered to amongst the most remarkable surviving examples of Roman engineering.  Lawrence was unusual amongst his peers in so far as he clearly embraced the lure of Roman archeological remains -  Knights and Monnington were by contrast drawn, almost exclusive, to the landscape outside Rome, and appear to have made no studies of a similar nature.